The Rare Undergraduate Thirsty (Cal Will Lose His Mind): "How Can I Save My Adjunct?" 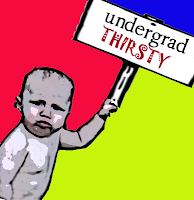 Although I am but an undergrad, I have been one for so long (seven years now) that I read this blog back when it was RYS. I can't remember how I first heard of it - it might have been through the Chronicle of Higher Ed, which I used to browse through after one of my parents, an academic, had finished with it. I began my college education in Lotus Land, aka a SLAC so obscure you've probably never heard of it, the kind of place where there are no multiple choice tests or course evaluations. After a tumultuous adolescence I'm finishing up my degree at a respectable but thoroughly mediocre state school.

I have a conundrum. I have course evals to fill out as a student, and I absolutely love one of my professors. She's a gifted instructor. She's generous with her time. She lectures for an hour and a half twice a week without notes, writing and explaining equations from memory in a manner so charismatic she makes it look easy. When I talk about this class with the "good" students in the major who have taken it previously, they speak of her in uniformly flattering terms. People love this instructor, even the students who struggle. She's fair, tough, has a scary reputation in the lower division classes.

What's the difficulty, then? She's an adjunct, and because of statewide budget cuts, her job may be next on the chopping block. I am trying to figure out something I could say in a course eval that would send a message to the right folks that this instructor is so wonderful she deserves a promotion, not a pink slip. Is there special administrator code that would get this message across? Would a letter campaign work? I can think of at least fifteen people who'd sign off the top of my head...

This is so frustrating to me in part because I took another class outside my major this semester, supposedly an upper division course, taught by a tenured professor, where the entirety of the course grade is based upon multiple choice questions ripped directly from the text, and where a substantial (> 10%) number of classes were spent watching videos. This professor has job security, while the wonderful fabulous adjunct doesn't? How is this just?