Some Thoughts on the Job Market 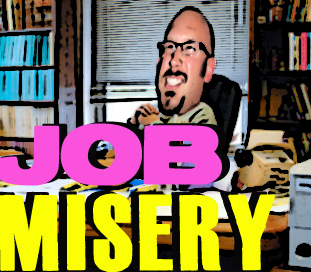 I have been pretty silent for the past six months. This is mostly because I've been busy, finishing my book while traveling the world to attend 12 different conferences in about 6 months. My f2f adjunct position fell through for the spring term, so I took advantage of that free time to attend as many conferences as possible.

The efforts paid off. I was able to pay my bills through my various online commitments. The freedom allowed me to attend conferences I never would have otherwise. I went to Australasia, to Europe, to the Middle East. I began a podcast. I spent a lot of money. I made a lot of friends. And I went on the job market.

It is a peculiar thing that we spend about 4 months applying, waiting, interviewing, prepping, and delivering job talks before discovering whether or not we are hired. I began drinking a lot more. I struggled to sleep while nervous and anxiety-ridden. The whole thing really is a lottery system. I had 10 phone interviews, no national conference interviews, and four campus visits. All four visits became a "no." One person told my advisor that they were going to offer me the job, and then offered it to someone else. Then an administrator called me out of the blue about a week after I had been passed over. He had been tapped to begin a new research center at an ivy. He wanted me to head up the research center. We have a huge endowment. We have resources and consulting academics. We have our own building on campus.

The whole thing is so bizarre. Everything that I did right led to a wall. Everything I did wrong -- the haphazard globe-trotting, the backdoor interviews -- led me to my dream job. Research, teaching, autonomy, hiring power. The process gave me a book contract and a well-paying position.

My friends and family tell me how much I deserve it. Surely, I will absolutely work hard and my enthusiasm and connections will benefit this new endeavor. They will not regret hiring me. But do I really deserve it more than most? Of course not. There are so many qualified people around. I was a perfect fit for this position -- my early education began at a similar institution and my recent successes at international conferences led to my election on an editorial board and this book contract -- but I can count about 6 friends who would be equally qualified. And countless strangers.

It bothers me that I applied to 33 jobs this year and that only one of those jobs ever sent me a formal "this position has been filled" letter. That one letter referenced my research by name and told me not to give up -- even suggested a journal that might publish one of my chapters. It was a generous moment amidst a sea of silence.

It's rather annoying that I spent so much time on each application only to get such incompetent organization. One application process said that references would only be required for the short list of telephone interviewees. Then on the deadline, all 300 applicants received an email requesting references by midnight -- with each of the 300 or so names CC'd rather than BCC'd. And the email itself had no salutation, no punctuation, and no sign-off. We instantly knew everyone who had applied, and all of those people had to obtain emergency references from their overworked advisers.

We talk about the misery on this blog. The inability for faculty to act as administrators is surely a miserable thing. Our disorganization, the rule by committee, the cautious wandering of our administration is all miserable. The lack of professionalism, the ridiculous amount of red tape, the waiting and waiting. Is there anything good about the process we use for hiring people? If there is, I don't see it. I followed the rules and got burned. I bucked the rules, and somehow this led to a job.

My only conclusion is that our profession suffers from paranoid schizophrenia. What else could it be? Too many voices wishing for too many things, with anxious and enthusiastic candidates waiting for the voices to calm and express a single wish: the candidate who will become the faculty member.