In Which an Administrator Bloviates 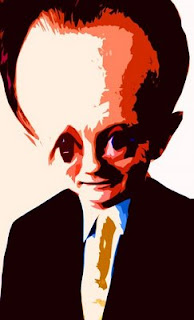 So I'm starting at a new institution this semester. And in general, I'm happy to be there. After all, I have a job as an instructor in my field. That alone is a coup, these days. No, the pay is not good. No, the students are not really very intelligent (so I hear). And no, my new place of employment is not what you'd call "cosmopolitan." I'm okay with all those things.

It's the fucking administrators I can't fucking stand.

But I suspect the food was a lure, much as it is with rodents. And the swinging metal bar that, unmercifully, did not deliver us to the sweet embrace of death was the disjointed and frankly alarming babbling of our dean. This guy has been with the school for maybe five years. He started in Financial Aid. He's never set foot in a classroom. And he's trying to get us all to buy iPads.

I didn't catch all the details, even though he mentioned the program six (!!) times through the course of the meeting. Apparently all faculty can get an iPad through the school. Which was recently given a Technology Partner award by Apple. I wonder if he has a quota to meet?

Of course, the iPad obsession was just a part of a more sweeping vision of the "mobilized classroom," as he called it. Half an hour, I swear to god, was spent demonstrating various apps he just thought were neat, and repeatedly emphasizing how "today's students" are "tech savvy" and "plugged in." He had no substantive suggestions for how we might use any of this whiz-bang tech to actually teach anyone anything, but I'm pretty sure he never saw that as a problem. He was just fascinated by the shininess of it all, as if the fact that it was new and nifty automatically made it useful to us as teachers, somehow.

I'm slamming this one guy particularly, but the other admins were no better. Every single one rattled on about "embracing technology" and "interfacing with students in an idiom they're familiar with." Content-free buzzwords were thrown around. Week-long "educational technology training" sessions were advertised. iPads were offered, naturally.

Now, I'm sure there are fields where this stuff could be useful. But, seriously, some of you may have figured out what my field is when I use the pathetically-weak pseudonym of "hamsterosophy" to refer to it, and talk about having discussed ethical issues or material implication. You know how I interface with my students? I assign readings, and we talk about them. Jumping Socrates, people. Will showing these kids a picture of the bust of Plato suddenly give them understanding of the Euthyphro? Will zapping the problems directly to the students' mobile devices rather than just writing them on the board help them with predicate logic? Will playing a YouTube video of Monty Python's "Philosophers' Football" give them a better grasp on German idealism? Even if not, the last one is still worth watching, but you get my point.

I don't want to sound like an old fart, but I am deeply suspicious of using technology just for the sake of using technology so I can... I don't know, look "technological." Maybe it has uses for content delivery. Fine. But the point is to teach them how to interact with the content - how to think about it. Not how to blog it or tweet it or do some other godawful 21st century thing to it. That's just abstract busy-ness. It's not learning.