The Kids Who Trashed the House. An Update Sent in by Burnt Chrome.

Here's a followup to an earlier article about some soon to be college students.


An Open Letter To Parents In Rensselaer County

What planet do you live on? 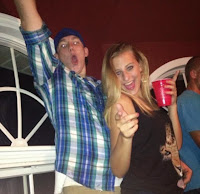 Last week, word got out that your children had broken into a home in Stephentown and threw a party. More than 300 of them partied and drunkenly smashed windows, urinated on the floors, stood on tables, punched holes in the ceiling and stole a statue that was part of a memorial for the owner’s stillborn grandson. Oh, it gets better. Before, during and after the party, they tweeted about it and posted pictures of themselves engaged in this behavior.


It goes on to say that kids will be kids (which I don't necessarily agree with) but when they act like dipshits it's your job as a parent to make them make amends. So there is at least one radio DJ who gets it.