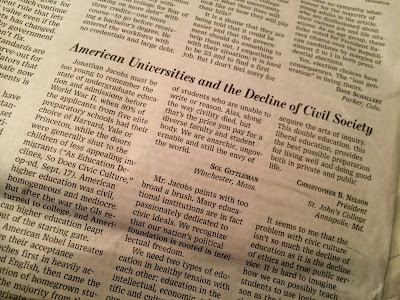 This was a wonderful day.  The person referred to as "Bubbsy" by a worrisomely significant other sat proudly on his horse in line behind a hundred other people outside an Apple Store and bagged the elephant.  He now is supersaturated with bourbon.  Probably 117% or so.  iOS7 knocked him off his rocker, so to speak.  It was "an experience," as one of his fellow travelers would say.

And then, in his drunken stage-7 stupor, he reads the Wall Street Journal on his kitchen table and photographs part of it for the Friday night CM friends.  There are slight moments of insight and clarity, he thinks, although he knows that he is quite drunk.  The world is whirling around.  What a goddamned kick in the pants it all is.

He worries--as he floats around in his drunkenness--about the world and education and all that.  If the future leaders are not smart, then who will feed and care for his four-legged friend after... you know....

As Education Declines, So Does Civic Culture
by Jonathan Jacobs
from the Wall Street Journal

Even as the cost of higher education skyrockets, its benefits are increasingly being called into doubt. We're familiar with laments from graduates who emerge from college burdened with student loans and wondering if their studies have prepared them for jobs and careers. A less familiar but even more troubling problem is that their education did not prepare them for responsible civic life. The decline in education means a decline in the ability of individuals—and ultimately the nation as a whole—to address political, social and moral matters in effective, considered ways.

The trouble begins before college. Large numbers of high-school students have faced so few challenges and demands that they are badly underprepared for college courses. Many who go on to four-year colleges seem to need two years of college even to begin to understand what it is to study, read carefully and take oneself seriously as a student. For many students, high-school-level preparation for college is a matter of having high self-esteem and high expectations but little else.

Even after three or four years of undergraduate education, many students still cannot recognize reasoning when they encounter it. They have little grasp of the difference between merely "saying something" and constructing an explanation or formulating an argument. This is often reinforced by college instructors who urge students to regard all theories, intellectual perspectives and views as ideology—without acknowledging the differences between theories, beliefs, hypotheses, interpretations and other categories of thought.

This impedes students from acquiring habits of intellectual responsibility. Far too often, teachers and texts insist upon a "verdictive" approach, a politicized view of issues. Whatever your stance regarding the "culture wars" and the politics of higher education, it is undeniable that a great many graduating students have little idea of what genuine intellectual exploration involves. Too often, learning to think is replaced by ideological scorekeeping, and the use of adjectives replaces the use of arguments.

Such blinkered thinking has serious implications for civic culture and political discourse. It discourages finding out what the facts are, revising one's beliefs on the basis of those facts and being willing to engage with people who don't already agree with you. What does that leave us with? A brittle, litmus-test version of politics. It is one thing if people move too quickly from argumentation to name-calling; it is another to be unable to tell the difference.

There has been so much grade inflation in high school and college, so much pressure to move students along regardless of their academic accomplishment, that it is unsurprising to find large numbers of graduates lacking the skills required for available jobs. They may also lack the patience and discipline to learn those skills: If you haven't been required to meet demands in order to receive good grades, then patience and discipline are less likely to be among your habits. For graduates who do find work, the reality of employers' expectations may come as a shock.

Many employers can attest, as college instructors will too if they're being frank, that many college graduates can barely construct a coherent paragraph and many have precious little knowledge of the world—the natural world, the social world, the historical world, or the cultural world. That is a tragedy for the graduates, but also for society: Civic life suffers when people have severely limited knowledge of the world to bring to political or moral discussions.

To see the effect of these trends, simply ask a few 15-year-olds, 19-year-olds or 22-year-olds some basic, non-tricky questions from non-esoteric knowledge categories (history, biology, current events, literature, geography, mathematics, grammar). See what the responses are. Ask these young people to describe the basic institutions of American government, or how a case makes its way to the Supreme Court or what "habeas corpus" means. The point isn't to embarrass them, but to wake up the rest of us to how little students have been expected to know even about the political and legal order in which they live.

The primary concern shouldn't be how American students rank in international science and math scores (though that is certainly relevant). It is whether the United States can be a prosperous, pluralistic democracy if higher education fails to require students to think, inquire and explain. A liberal democracy requires a certain kind of civic culture, one in which citizens understand its distinctive principles and strive to preserve them by addressing issues and one another in a responsible manner. That is essential to the mutual respect at the core of liberal democracy.

The U.S. faces serious challenges; education should be serious and challenging. The cost to America of failing to reverse the trend toward trivializing education will be more than just economic. It will be reflected in social friction, coarsened politics, failed and foolish policies, and a steady decline in the concern to do anything to reverse the rot.