Presentation Misery with Conan the Grammarian. 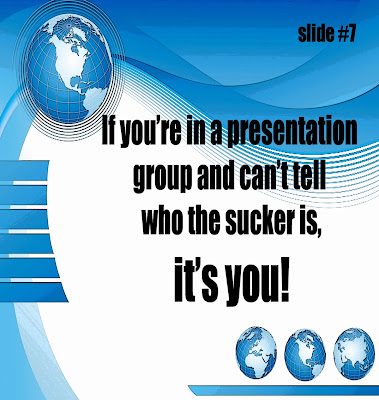 As I've mentioned before, I'm an undergrad at a middling business school, yadda yadda yadda. Professors in my major adore group projects and presentations. It kind of comes with the territory. And if the project makes sense and my group members are intelligent and responsible then everything works fine. But sometimes they suck. In my one class I got shoved into a presentation group with Bill Bronx from this post. You can imagine my terror.

I approached the professor privately (this was a completely different class that he and I happened to have in common) and informed her of my concern. She was helpful, but told me that she couldn't just offload him onto another group and that I should keep in mind that not everyone in a group necessarily gets the same grade. In an effort to help me, she enlisted another student's help by having him join my group to "move things along." I was grateful.

But, like many M. Night Shyamalan films, the ending of this story is unexpected, more dramatic than anyone would like it to be, and hackneyed. Bill Bronx, to my pleasant surprise, pulled through like a goddamn champ. He was always on time for group meetings, submitted his sources on time, and contributed timely and quality work. The student who had joined the group explicitly to compensate for Bill Bronx apparently decided to compensate for Bill's competence by being a lazybones. He didn't submit anything on time (I had to type up his sources for him), never attended a single meeting, and wasn't prepared on presentation day. In fact, we had to add his slides to the PowerPoint the day of the presentation. And, Holy baby Jesus, during his part of the presentation he said, very loudly, with a puzzled look on his face, "Conan, you put my slides in the wrong order."

... *deep breath* Brothers and Sisters, let us all join hands and recite the Idiotic Shithead's Prayer. O Lord, perhaps as some divine punishment for my sins, you have stuck me with this nincompoop. Grant that only my body, my mind, and my spirit shall suffer, O Lord, on behalf of this fool and allow not my grade to be affected. For You are the giver of mercy, O Lord, and I beseech you to give me the strength to act as your Steward and return this ungrateful asshat to his place. For he is lazy where he ought to be diligent, foolish where he ought to be cautious, and proud where he ought to be meek and grateful. He reaps what he does not sow, like the lazy fool he is, Lord. And further, O Lord, grant that I may lay my hands upon him with great force and alacrity, that he may learn his lesson and bear a mark for its learning. Amen.

Now, for the record, I insist that the slides were correct. I insist that everything was as he specified it. But, pretending that we were in some bizarre, Martian world where I was mistaken, the last thing you do when a PowerPoint is screwy is announce proudly to the audience: "The PowerPoint is screwy." You roll with it, man. You have to learn to take things as they come. You will fail in the professional world if you can't bring yourself to make a two minute elevator pitch because you thought you would have ten minutes and a PowerPoint. Not to mention that he had the audacity to complain when he had done as little as he possibly could have done in the confines of the project while still being able to put his name on it.