"Oooh My Head." A Speedy Rant From Jeff in (Not That) Jamaica. 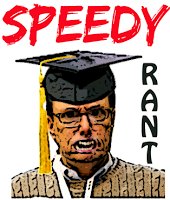 I have two sisters in class who sit at the back of the room. They are Irish twins, but act as if they share a brain (a small one). But they have their own phones and are doing that selfie thing before and after class, sometimes with me and the whiteboard in the background. (I had to ask them to stop posting to Instatweet during class on the first day.)

They are Internet celebrities. I mean it. There's an article on our college's newspaper about them. They murder cover versions of bad songs, talk styling, shopping, etc. They are annoying about 100X more than what annoying used to be.

In class last week I was doing (if I may say so) a terrific job of leading us all through some important new concepts for our next set of unit readings and projects. I was writing on the board, walking among them, getting some hard-won responses from some students who were willing to play along.

As I returned to the front, I spied the sisters in the back row, both with their phones to their faces.

She put her phone down, looked at me, looked at her sister, did the eyeroll, and then said, "Ooooh my head."