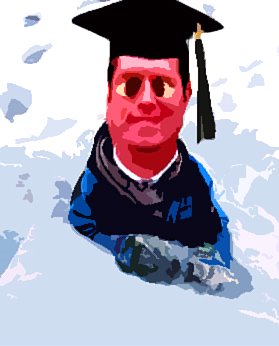 Spring term just started here at Hip Urban Community College, which can only mean one thing: hordes of unenrolled students 'crashing' (their term. I prefer 'stalking') the first day of my classes begging me to override them onto my roster.

This is apparently a common practice here at H.U.C.C., albeit one I never really had to deal with at my previous institutions. My first school used an online enrollment program with a numbered waitlist, so I never encountered these issues there. My last school, Northern Southern Central Hillbilly State, was small enough that students scrambling to add classes knew they could go make puppy dog eyes at the 'Freshman Success Coordinator' (sadly, this was a real, full-time position at that school. Sadder still, I'm pretty sure they made more money than most of the faculty in the college of liberal arts) and get them to bully junior faculty on their behalf. But I never had unenrolled students just showing up to my classes en masse before now.

This took me a little bit by surprise last semester, but I walked into my first class today feeling like I knew what to expect. Enrollment was down this semester, so the chair sent around an email this morning instructing us not to add anyone to our rosters, but to direct unenrolled students to go to the main office so they could be funneled into open sections with a need for warm bodies. After passing out syllabi, I announced that this particular section was full, that I would be unable to add any students who were not already enrolled, and that anyone looking to add a class should go speak to our department's secretary. Right on cue, 9 students (9!) got up, handed back their syllabi, and shuffled silently out of the room.

I had to make that announcement two more times over the next 10 minutes as groups of crashers first entered, then quickly left, the room. At the 25 minute mark, a spacy looking dude walked in and, instead of taking a seat, stood a few feet in from the door staring at me expectantly. At first I ignored him and continued my first day spiel, but he just continued to stand there and stare at me. After several minutes I could see he was obviously distracting all the students seated at actual desks so I gave up and addressed him directly.

Me: I'm sorry, can I help you with something?

Spacy Dude: Yeah, I was hoping to get added into this class.

Me: This class is full up, and I'm not allowed to add any overrides this semester. Go one floor up and talk to the people in the main office, they'll find you a section.

Spacy Dude: Oh, I just came from the main office. I was talking to somebody there but they didn't really help me.

Me (in my head): Well I'm in the middle of fucking class, dipshit, so add me to the list of people not helping you right now.

Me (aloud): Well, like I said, this class is full and I can't add anyone, so you'll have to go back to the main office and talk to them about it.

S.D. reluctantly wandered off, I turned away several more polite crashers before the end of the period, and the rest of the class went fine. When I walked out of the room to leave, guess who was sitting outside the door waiting for me.

S.D.: I went back upstairs, and I was going to talk to the lady who wasn't helpful before, but then I ran into a student worker, he was like, across the hall from her, if you know who that was--like, the tall guy? I think he was a student worker-- and I told him my problem, and *HE* said that professors can add anyone they want into their classes, and *I* said that I'd talked to the lady across the hall from him, and she sent me down to talk to the professor, but the professor didn't seem to know what he was allowed to do, so he sent me back up to the main office, and when I told *HIM* that he said you could definitely add me into class if you wanted, so can you add me into your class?

Me (in my head): (muttered profanity)

Me (aloud): Ok. Well, I don't know who this guy is that told you that, but like I said, my class is full right now--

S.D. (cutting me off): When I was in the room it looked like there were a lot of seats open. I don't know how you determine spots, but is it by number of seats, because--

Me: No, the roster doesn't have anything to do with number of seats in the room...

We continued going in circles for a few more minutes before I finally got rid of him with my standard bullshit about waiting to see if any spaces open up. I call it standard bullshit since H.U.C.C.'s open enrollment system mercifully ended last night, so I'm reasonably sure he can't add the class at this point without my permission. I'd like to think that if I had tenure, I would've interrupted him as soon as I saw him outside the room so we could have had a Real Teachable Moment:

"Spacy Dude," I would've said, "I don't know if you're Spacy and failing to pick up on my social clues because that's just who you are, or because you came to school super-high today, but either way, you're not getting into this class. What you're doing is asking me--a total stranger--to do you a favor I'm not required to do. If I add you into this class I'll be creating hours and hours of extra work for myself--extra work I won't get paid more for, you understand.

'But more importantly, I'd also be agreeing to interact with you several times a week for the next 16 weeks. And even though I've only known you for about 6 minutes, I already dislike you. Your first impression was interrupting what an entire class was doing to discuss your personal problem, and your second impression included telling me about complaining to other people that I didn't know what I was doing.

'So I won't take you into my class, but I will leave you with this lesson, my young friend--if you're going to ask people for favors, don't annoy them, don't interrupt them, and just generally try to be less of a dick about it."

Of course I'm contingent faculty so I kept all that to myself, but one day...one day...