Uggy in Utica Stands Up! 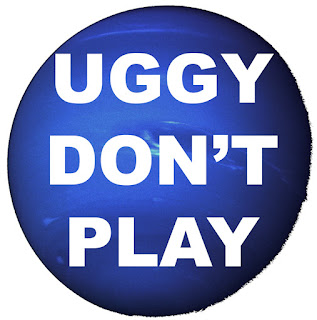 This is my fifth term teaching a general-ed astronomy class for non-STEM majors. I always give the same first assignment, which is designed to help students visualize the size and scale of the universe. We begin by watching the Powers of 10 video by the Eames brothers (if you haven't seen it, it's awesome, and only 10 minutes long). We then complete the first homework problem--a rough estimate of how many solar systems you would have to arrange side-by-side to reach a nearby star--together in class. The rest of the assignment is also based on Powers of 10.

Last week I received by far the most atrocious batch of assignments I've ever seen. After many years of students calculating that the nearby star is 1/1000th the distance to Neptune (who knew we orbited a binary star?) I didn't expect them to actually think about what the numbers meant. But chicken-scratching their "calculations" in the margins of the assignment sheet? Obviously a majority of the students spent less than 10 minutes on the assignment.

While I was grading, I thought about making the first assignment extra credit, or curving the scores upward, as I would have done in past semesters. But then something inside of me snapped. I got on the LMS and sent directions to every student who scored below a C- (the minimum grade for satisfying gen-ed requirements) to re-do the assignment at the physics help center. They have one week to bring their papers back, signed by the help center TA who tutored them.

After class, where I reiterated the requirement that students with less than a C- visit the help center, one boy came to me and said, "Professor, I didn't realize you were checking our assignments for accuracy. I thought you were just, you know, giving grades based on completion and effort." I refrained from saying that if I graded on effort, he'd have an F-. I just repeated the directions for visiting the help center.

Exhausted from preparing the dossier and less threatened by the need to get great evals, I finally acted like an educator instead of a customer-service agent. It felt good.