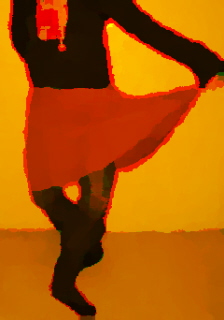 So.  This past week was Spring Break, and I have an essay due Monday at 11am.  I reminded them up the ass about this.  I have story boarded the damn essay in class in such a way that if Stella, bless her, knew where I lived, she'd pay Strelly to blow up my house.  I asked for drafts from the beginning, but so many had not sent them to me by the beginning of Spring break that I made them one last deal:

I told them if they e-mailed me their drafts by Monday, 11:59am, I'd look at them over the break.  8 did this.  Nadine was the last one to e-mail me something.  I admit I did not specify when, exactly, I would look at them.  I looked at Nadine's (the last one I received at exactly 11:59pm) on Friday morning at around 1am, before taking off for Boston for an overnighter with my 15 year old daughter (we had a blast!) at a more reasonable hour on Friday.  Nadine did not send me anything----she sent me a blank document. I e-mailed her and told her to send it to me pronto and I'd look at it in the morning on Saturday as I would be away from the computer all day on Friday.


Saturday morning, I checked my e-mail like the pussy I am.  I reviewed three essays which students had rewritten with my comments after I had reviewed their essays the first time.  I made more comments on those three essays, then looked at Nadine's.   Nadine sent me her "draft" which was one paragraph and one sentence.  She also told me she had been waiting by the computer, hungry for me to get back to her, waiting waiting waiting.  So anxious. So disappointed that it took me from Tuesday till Friday morning to get back to her.  Can I add here that I assigned this essay three and a half weeks ago? In the intro, they were supposed to identify the theme of the story they were writing about.  There are two full pages in the textbook I use, explaining what theme is and giving examples. I also gave examples and storyboarded in class, as I said.   She said the theme was a car in the story which is a symbol for the love between two brothers.  The car is certainly a symbol for that brotherly love in the story, but that symbol is not the theme, so that was wrong.  That's all she said.  That's it.  So on Saturday morning, while my daughter slept peacefully at the decadent hotel we stayed at (use hotels.com, folks----we got the Marriott Longwharf in Boston for $99!!!!!!!) I emailed Nadine back and told her the exact pages in the text to read, and that a symbol is not a theme.  And I told her to think about the theme, and to write the full essay in support of that theme (it's more of an old fashioned formalist essay, but then I went to a Jesuit college for undergrad which gave me a strong background in such things and I like it for a first half of the semester essay) and that I would read her draft on SUnday morning---to send it to me by 9am.  At nine am on Sunday, I log on.  There is an e-mail from Nadine, full of the kind of manipulation and blame game that I have come to expect.  She was waiting, desperately, from 11:59 Monday night on, to hear from me.  Now she had to work, and also she had come down with a headache.  She was not going to be able to get me a draft by Sunday morning, and she would not be able to hand in her essay by Monday morning, and the reason was, that I waited too long to get back to her that she had sent me nothing the first time.  If I had let her know earlier, and had been able to send her feedback FRIDAY morning, THEN everything would be different.  But because I had been negligent in my duties, this whole thing was ALL MY FAULT and so I should let her hand in the essay late.

I have a no late essays policy, on account of the fact that so many of my students don't even START their essays until the due date.  Fuck that.

I sent Nadine back an e-mail saying she should try to get it in by Monday in class, because she'd be getting a zero if she did not, as per my syllabus.