I don't know, but I think the academic world breeds some very strange characters. Perhaps some of the world's strangest.  Meet some of the interesting folks with whom I work: 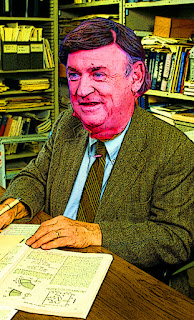 Toupee Tom:  When I started here, lo so many years ago, I thought I must be seeing things wrong.  Like....maybe there was a deformity on this man's scalp and I would be rude to look too closely.  Tom wears a rug that is at least 30 years old.  The part has begun to come apart.  The glue is old, yellowed, and showing.  The hair is a very different color from what is on the rest of his head (which is white).  Eventually, and it took a very long time, as Tom wears this....thing.... with a very straight face, and has a position of importance at the college, I mentioned it to someone from his department.  "What's with Toupee Tom?" I hesitantly queried.  "No one knows," was the reply.  The kicker is that everyone apparently follows up their initial query with the same question, and I did it too: "Doesn't the man have a wife at home?"  Why are the women always to blame for their husband's lack of style and taste?

Otherworldly Olga:  This gal is surely the real life inspiration for Professor Trelawny of Harry Potter fame.  Olga teaches a discipline which has her traveling throughout the jungles of South America and traversing through Asia.  No one knows where she gets the money, as she is an adjunct who is always angry about not making a living wage.  Olga is working on several books, and has had television specials in distant lands.  She married a spiritual advisor from India, but no one has ever seen him.  She did claim, at the last department get together, that her husband had appeared to one of her enemies at the college in his star form, and that the enemy was leaving her alone now.  So at least she's got that going for her, which is nice.

Days Gone By Daniel:  Daniel, you really should have retired 15 years ago.  I know, you have a doctorate, and this makes you special at a Community College (at least, it did 25 years ago).  But you don't seem to know anything that has happened in the world since 1980.  You want to develop a World Lit class, but began your pitch telling me that World Lit is actually just European Lit, since there is no scholarship on writings from....other places. You would listen to nothing on that subject, and would see nothing of what I wanted to show you online in a very quick search for the kinds of scholarship you claim does not exist.  Uh, yeah.  We'll put your World Lit idea on the agenda for the fall.

Drunk Diane:  Do any of you have a Drunk Diane?  How does she do it?  Keep her job, I mean.  She gets drunk every day at a city square blocks from the entrance to our college, then comes in to teach her classes.  She claims that if she ever slurs her words, it is because of the meds she is taking for her condition.  It is a condition that apparently sets fear into the hearts of the HR folks, because no one will say anything to her about her alcohol on the job habit.  The worst part is, she won't even share.