I can't say I'm totally surprised. But it actually happened. 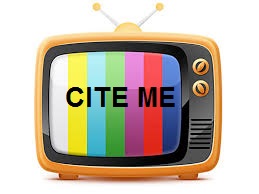 A student cited a television show as a legitimate example of, like, a real phenomenon we are discussing.

Take your favorite ... Law & Order (for law related disciplines), House (for medical), How I Met Your Mother (for, um, social interaction) ... and insert it in this (redacted) flava.

To be fair, Thomas Telly did say it was a fictional example. But then he went on to describe in detail how what was a dramatization of a semi-recent current event was an example of how law/medicine/dating works.

I'll admit, I have occasionally referenced a television show related to our discipline in the context of a better-than-average portrayal of an issue in our area. But I do not hold up The Simpsons as indicative of American family life or Grey's Anatomy as illustrative of the providing of medical care.

Oh, and did I mention, this is a graduate student?