In which students are not the only irritants 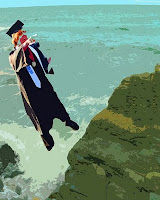 The university system in the UK is based at most institutions on a model where students on a programme form a single cohort and complete each year of study in sequence rather than accumulating at least some credits in an order of their choice.  This makes for relatively easy advising, at least!  This also means that if a student messes up one year, they can have problems progressing to the next year (e.g. if they failed a pre-requisite, or haven't got enough credits from Level x to be allowed to start Level x+1).

My university partly deals with this by having a summer exam period, when students who failed part or all of a module or who missed exams/coursework deadlines in May/June due to 'Good Reasons' and got formal extensions, can submit coursework and take resit exams.  This happens in late August.  An extra exam board is then held in early September to process the marks properly and allow students to move on with their group, without incompletes hanging over them.

Summer exam period is a Good Idea, but it's Not Popular with academics... because yes, we are on 12 month salaries, but it's conference season, school holidays, research time, and generally not a time when we particularly want to mark Little Johnny's second attempt at an essay.  Especially when one believes that Little Johnny got their extension on very dubious grounds.

I've been conferencing, and only returned to the department today, to find an email sent first thing this morning requesting that I mark a particular piece of work (a 15,000 word project, no less) by the end of the day as the person administrating the marks needed it urgently.  Fine, I shelve my plans, I do the work, I submit the grading report via email... and get an out of office message saying that the administrative person in question is out of the office until Monday and will 'deal with your message on my return'.

The 'flakes are among us... and I need chocolate.