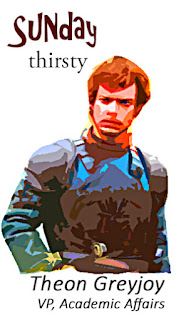 Q: Which Game of Thrones characters do your colleagues and administrators remind you of?
Which one is you?

Two different readers sent me this Onion link so I thought I'd add it...

Area resident Jonathan Green does not own a television, a fact he repeatedly points out to friends, family, and coworkers–as well as to his mailman, neighborhood convenience-store clerks, and the man who cleans the hallways in his apartment building.

Jonathan Green, who tells as many people as possible that he is "fully weaned off the glass teat."
"I, personally, would rather spend my time doing something useful than watch television," Green told a random woman Monday at the Suds 'N' Duds Laundromat, noticing the establishment's wall-mounted TV. "I don't even own one."

According to Melinda Elkins, a coworker of Green's at The Frame Job, a Chapel Hill picture-frame shop, Green steers the conversation toward television whenever possible, just so he can mention not owning one.