In Which The Semester Wanes and Bella Gets Feisty.


My students are getting on my last nerve! I mean---turn your brains on, people!! I normally manage to avoid conflict with them, but hey, it's April, the cruelest month, right? Here are some of the worst offenders. 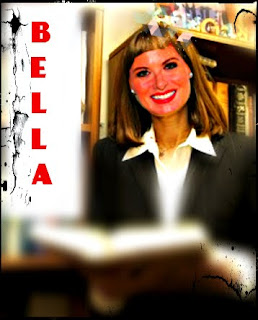 1. Answer Annie approached me during an exam, with a question about being asked to explain/define and then give examples of different types of narrative techniques (discussed extensively in class). Annie told me in a loud voice that she could not do that question until I explained to her what narrative technique was. "Ahhhh....that's what I am asking YOU, Annie," I told her. She looked at me blankly, and then rephrased the question, trying to ask it in such a way that I would give her the answer already. "Sit down, Annie. I'm not giving you the answer." Annie thanked, me, in her loud voice, for helping her learn!! I usually ignore stuff like this. I didn't this time. "You can either check the attitude and take an honest exam, or leave now. If you did not learn this yet, YOU ARE NOT GOING TO LEARN IT." I regretted it immediately, but it had the desired effect, so no regrets were necessary. Annie came up to me after the exam and asked me if "we were okay?" I looked at her coldly for a half a second, then gave her a patently fake smile. She left, looking awkward and insecure, the poor thing. Maybe her teacher does not wuv her unconditionally! (Her teacher doesn't wuv her at all.)

2. Religious Rita was asked to read some lesbian erotica in my online class. Very mild stuff. Thoroughly contextualized for the class. Hardly qualified as erotica at all. She wrote me an e-mail, explaining that she had morals, that she was a Christian, and so she could not read this disgusting material and had skipped the assignment. She hoped that I would not persecute her for her religious beliefs. Sorry, she said, but her soul's salvation had to come first. Rita is very close to failing my class already. And this is a hot button for me as I am a Christian, and I HATE when people make ignorant, intolerant claims in the name of all Christianity. I told her that she needed to be precise in her language when making intolerant proclamations on behalf of large groups, and that she should identify the particular denomination she was speaking for when using hate speech. And that she would be receiving a zero on the assignment, as she had for other assignments not completed. I have no idea what will come of this, and I don't know that I care at this point.

3. Cheating Charlie came to see me at the Writing Center, where I work as a tutor as part of my contract (long story---we all have to do such things at Inner City Community College, but tutoring is not a particularly popular choice. I usually like it). Most of the tutors are either paid EAs or student workers. He had a paper he needed to "rework" before he handed it in. The paper was ten pages long, and his professor told him he had errors in the APA formatting, and needed more citations. Charlie was outraged about the APA formatting criticism, claiming he KNEW it was right. "Hmmmm. Well, there's a little problem here, with the running header, and here....with the citation format....oh, and your works cited page is completely wrong!------why did you think this had to be right? What are you looking at for guidance?" I asked. Charlie mumbled something, and suddenly we were onto what he needed to put in his abstract. "Well, you need to explain what kinds of sources you used, and how you used them to make the central points of your paper," I told him. APA is not my specialty, so if any of you CMers want to help me improve on that explanation, have at it! But here, my friends, is where Charlie ran into some difficulty. He did not know much about his sources. "Why not?" I asked. "This is a long paper----you must have spent some time with them! Do you have them printed out?" Charlie produced some printed out copies of articles (the printouts were required to be turned in with the final draft). I began going through the essay, looking for citations that matched his printed out articles. None of them did. "Charlie, these are the wrong articles. Did you write this paper?" Charlie had had it with me, a lowly tutor with an attitude, as he seemed to assume. Why didn't I mind my own business, he asked, and just help him make this work? What was I getting paid for? If his professor did not catch him, what did it matter. I stood up -- "I will not help you. Goodbye." I went into the next room, and he followed me, yelling that this paper was due TOMORROW and he needed this help! He was going to complain, he threatened I walked up to the phone we have in every room at Inner City Community College that has security's number on it in red. "Get away from me or I'm calling security." I said as I gave him a cold stare. Charlie could not believe it, and went to complain about me to the writing center director (one of my closest friends at work). I pocketed the intake sheet with Charlie's professor's name on it, and headed out the door. My work there was through.

I am glad the semester is coming to an end soon, or things could really get ugly!!